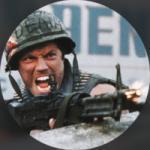 Info on Various Mounting Systems for the M2hb

8 posts in this topic